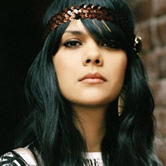 The Haunted Man is the third studio album by English recording artist Bat for Lashes, released on October 12, 2012 by Parlophone. The album was preceded by the lead single "Laura", which was released on July 24, 2012.

The album's artwork was photographed by American photographer Ryan McGinley, and features Khan naked carrying an equally naked man on her back. Khan told the NME: "I really wanted to strip things back in honour of women like Patti Smith; just these raw, honest women. I had no make-up on, it's just me and my haunted man!"